How is it that I watch the Real Housewives of New Jersey for mindless relaxation, but instead I just end up stressed out about how mindless these people are?

The Manzos/Lauritas and Guidices/Gorgas/Wakiles1 are on vacation in Napa. This episode is like episode 5,000 of this trip, and I have been increasingly bored and infuriated by these people this season, so I only halfway know what the heck is going on at the beginning of this episode. Next thing you know, everyone is boarding a tour bus with Albie, Albert, Caroline and Chris are looking scared as hell. Chris is warning everyone to be on their best behavior. Yeah, good luck with this crowd.

We then find out from Caroline’s voiceover that the gang is on their way to a business meeting:

Initially, it was supposed to be Albert, Chris, Albie. And then I guess Christopher felt kind of bad and was like, ‘Mom, you wanna come?’. And I felt kinda bad. ‘I’ll ask your sister.’ ‘Well, Vito would like to see it.’ And then, like, before you know it, we’re all going to the vineyard—which is fine… Maybe.

No, Caroline, no it’s not! And I can tell from the look on your, your husband’s, your sons’ and your brother’s faces on the bus that you all know this isn’t fine.

First off, at least two of the people in your group are, on their best days embarrassing and on their worst, certifiably crazy. I’m looking at you Teresa and Joe Guidice. Second, much of your group spends a lot of time—and I mean a lot—at each other’s throats (okay, this is really an offshoot of the first point, since the Guidices are usually the source of the problem where fights at concerned). Third, and more importantly, this is a business trip. You know who doesnt belong on a business trip? People who have no business and (most importantly) have no respect for the people that do.

So as you can probably guess, the extraneous non-business-having people on the trip acted like asses and embarrassed the guys who were supposed to be conducting business [and Caroline; but let’s face it, that bitch Teresa is “eating crackers” with her right now, anyway]. Teresa is in her voiceover totally confused [isn’t she always, though?] as to why people were mad, when she thought they were there to have fun. The woman at the winery with whom the Manzos/Lauritas are conducting business is being awfully good-natured about everything, even though she is probably seething inside [i am sure you would put up with a lot of tomfoolery, too, if you knew your small winery was getting free publicity every time someone on this insipid show mentioned your winery’s name. Though, I’m not so sure how excited about the publicity she remained after this episode aired and she got to witness Teresa and Joe Guidice having a quickie in her vines. Yes. Seriously.

Honestly, though, I can’t blame the interlopers, not even the Guidices. They never should have been invited in the first place. One very important rule of business is that everything you do in reference to your client reflects on you, that includes who you involve in your business affairs. If you bring along tagalongs, their behavior is a reflection of your judgment. It shows very poor judgment to bring along a band of idiots. The extras should have been left back at the resort, or at the very least, Chris/Albert/Albie should have set up a separate (non-business) tour for the others at the winery while they finished their business transaction.

I am not sure if the guys got this wine distribution contract they were hoping to get on this trip. Honestly, I don’t really care. I do know, however, that if I were ever conducting business with someone and he/she/they brought along 10 imbeciles with him/her/them to our first meeting, I would look for a different partner for my business ventures 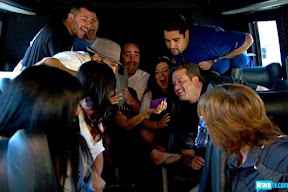 1. If you are fortunate enough to never have seen this show, allow me to “briefly” explain how these people are connected. Caroline Manzo (née Laurita) is the older sister of Chris Laurita, who is married to Jacqueline. Caroline’s sons, Albert IV (Albie) and Christopher are currently in business with their uncle Chris (Jacqueline’s husband), who sometimes does business with their dad (Albert III). Caroline and Jacqueline are on-and-off friends with the absolutely insufferable Theresa Guidice (née Gorga) (who changes the way her last name is pronounced every time she makes a television appearance, so please don’t ask me how to pronounce it). Teresa, who is married to Joe, also has a brother named Joe. Brother Joe is married to Melissa. Joe (Gorga) and Teresa are cousins with Kathy Wakile.

Teresa is in the middle of a fight with Caroline, because she made fun of Caroline in her cookbook, among other things. Teresa was fighting with Jacqueline, because (long story short) Teresa is a terrible friend. They recently made up, because Jacqueline is a pushover. Teresa and Melissa were fighting, because Teresa is obviously jealous of Melissa, as her husband is of her brother. They recently made up, because they’re family, and Melissa and Joe (brother Joe, not husband Joe) wanted to be adults for the sake of their kids. I honestly couldn’t tell at the beginning of the episode if Teresa and Kathy were fighting, because they are always going back and forth between fighting and and wanting to act like family. Just know that when they are fighting, it is always some inconsiderate thing that Teresa has done that she (as always) turns around and tries to use to argue that she is the victim.