The weather has finally dropped and stayed low enough for me to get in a gumbo-making mood — not that I really need an excuse, but Pop Culture Dad usually makes jokes when I make gumbo, and it’s 90 degrees outside. I make a pretty good gumbo. really good, actually. Since I’m also in a writing mood today, I thought I’d share some of my gumbo secrets. Unfortunately, I’ll probably never share my gumbo recipe. My best friend knows, and while she hasn’t been exactly sworn to secrecy, she’s not telling. Pop Culture Dad has seen and even helped me make it, but even while eating it, he probably couldn’t tell you a single ingredient in it. So right now, this secret recipe stays closely held. I will however share several pointers that should help you make an excellent gumbo no matter whose recipe you’re using.

As any great gumbo cook will tell you, the roux is the heart of the gumbo. Mess up here, and your gumbo is a goner no matter what else you do. The good news is, this is the easiest and cheapest step to fix. If you over- or under-cook your roux, throw it out and start over. If you mess it up again, chuck it all and start over again. Trust me – never rest on a bad roux.

I’ve read several recipes that call for equal parts oil and flour in the roux. Unless you like really greasy gumbo, don’t ever do this. Ever. There should always be more flour than oil.

Some recipes call for butter and others for oil or shortening. My personal preference is that butter-based roux [not “rouxes”; that’s not a word. Even though I’ve probably said it before, that is not a word. Let me say it again in case you missed it, “rouxes” is not a word.] be used for étouffés,while oil-based roux should be used for gumbo. Save the shortening for your pies and cookies. And olive oil? Yeah, no. Not a good taste. Never use an oil with an overpowering taste as part of your roux.

And while the idea of seafood stock as part of your roux base sounds intriguing, skip it. Water works just fine.
So, given that your basic good roux is just oil, flour and water, tell me again why you would ever keep a bad roux? Say it with me: “A bad roux just won’t do. Throw that sucker out.”

I will say, however, that one mistake I’ve seen a lot is people trying to get too “fancy” with their gumbos. When you try too hard, the result is usually more of a stew and not a gumbo. Gumbo means something, and crazy ingredients just don’t fit that meaning. When I lived in New York, I once went to a restaurant that claimed to have excellent seafood gumbo. Among the ingredients were snapper, flounder and Mahi Mahi.  Roux or no, that is not a gumbo. That’s a fish soup. [Side note: I tried it anyway. It was disgusting.]  I had a professor in law school that had us all over for “venison gumbo.” It was a very delicious venison stew; but as he darn-well knew when he served it, it was not a gumbo. I feel as strongly about this as I do people who use cream of chicken or cream of mushroom in a dish they claim is an étoufée. It is not, and stop telling that lie.

On the flip side, don’t go too pedestrian with your ingredients. My mom and some of her sisters use dried shrimp. I understand that growing up that’s all they could afford, but now that they can buy better, don’t go there. Gross gross gross.

Another note learned from my mom’s misadventures in cooking: do not, I repeat do NOT, cook your meat or vegetables before adding them to the roux. The mixture of the juices when everything cooks together is what makes a gumbo so good. If you precook your meat or veggies, you lose or alter the juices. Just don’t. The thing takes two hours to cook. If you don’t have the time to simmer your gumbo properly so that all of the meats will cook, then don’t bother making it that day at all.

And if you’ve ever cooked, you should know that seafood cooks more quickly than anything. If you’re adding shrimp or crab, do not add them until five to ten minutes before the end.

Yes, yes, yes. I know Emeril says that all Créole cooking requires the Holy Trinity of celery, onion and bell pepper. As a Créole rather than some guy from Jersey who cooks (really good) Créole food, I’m gonna say that’s bunk. Yes, my Holy Trinity appears in many things (like my étoufées or my cornbread dressing), but you will never find a piece of celery in my gumbo. I just don’t like it. Again, it’s a personal choice. If you like it, go for it. But I never will.

The veggies are usually the first thing I add, and they get a little bit of alone time with the roux before the seasoning and the meat are added.  The only exception to this is okra.  If you choose to add okra, that should only go in before the seafood (at the end). My okra usually only cooks 15 – 20 minutes. Otherwise, the result is often slimy okra. {{shudder}}

Totally a personal choice, but I think you can’t go wrong with Uncle Ben’s Converted Rice. Of course, I also think this rice is so good that with a little butter, I’d eat a bowl of just that. So maybe I’m a little biased.
=-=-=-=-=

Hope these tips serve you well. All this gumbo talk has made me hungry, so I’m going to go tend to mine. 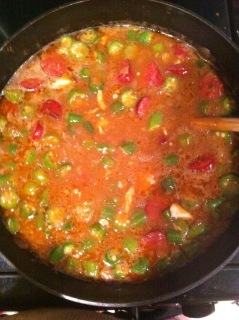 While cooking on the stove. Probably a bit much for a family of three. We could eat for a week off this thing [if only Pop Culture Dad ate leftovers].

The finished product! And it was good (as usual)!

2 thoughts on “My Gumbo Secrets”