I just got this in my email from Bravo: 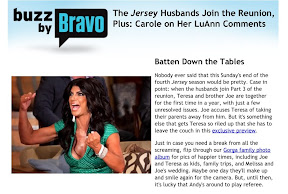 OMFG, how many parts ARE there to the RHONJ reunion show??? They say three, but I swear it feels like at least 30. And I could have sworn that Juicy (ew!) Joe was on the part I fell asleep watching last week. So how are the husbands just joining now? Don’t you mean “the other husbands,” Andy?

Without watching, I can tell you exactly what happens:

Teresa will lie and blink a lot, use some not-so-big-words incorrectly, accuse everyone of ganging up on her, and pretend her marriage is solid as a rock while everyone else’s is falling apart. She will insist that every hurtful thing she has ever said to another cast member was “just a joke. Don’t you get it??” She also will claim that everyone is just jealous of her and her celebrity and take zero responsibility for the fact that every single relationship in her life (except the one with Dina, whose bitch has been showing since she left the show) has crumbled.

Joe will sit with her and continue to insist that he was not talking to his mistress on the phone when he called his wife the b-word and the c-word and then pretended he was talking to a Spanish worker (in Italian, natch) when she caught him. They will both claim that they are very wealthy and at no time committed bankruptcy fraud, despite lying to the Office of the United States Trustee (a division of the Department of Justice) about their assets. Then they will insist that, despite the fact that they give paid interviews to tabloids every other month, that their private lives are private, and people should butt out. They will also insist the tabloids twisted their words.

Jacqueline will also lie a lot, yell at Teresa, cry a few times about her son, Ashley, and her now-dead friendship with Teresa. She will claim her marriage is strong, even though it probably isn’t or at least wasn’t at some point. She will avoid talking about Ashley unless or until someone else brings it up, which they will (I’m looking at you, Andy)

Melissa will yell at Teresa… a lot. She will once again mention during every single topic that her single is set to be released on iTunes very soon. She will not sing live. She will, however, flip her hair and bat her eyelashes… a lot. She will mention that Teresa hates her and is out to get her, and while this is all true, she will exaggerate it and blow it out of proportion until no one cares anymore [I’m already at that point, in case you couldn’t tell].

Joe will join Melissa on the couch and yell at Teresa… a lot. He will mention their father no less than 10 times. He will also talk about therapy. He and Juicy (ew!) Joe will get into it and maybe even have to be separated by security. In short, it will look a lot like Melissa and Joe’s son’s christening (Jesus loves a good brawl per the Gorga/Guidices).

Kathy will roll her eyes… a lot. She will continue to switch sides depending on who seems to be winning the argument at that point. Ritchie will join her and make some extremely disgusting jokes that no one wants to hear. Their daughter, Victoria, will be away at college somewhere watching in her dorm room, cringing, and pretending like she’s never met these people in her life.

And last but not least… Caroline. Caroline, I lurves ya, but you iz wearing on my nerves too, gurl. Caroline will keep her arms folded across her lap, looking down at everyone in judgment (rightly so). When Jacqueline is addressed directly, Caroline will answer for her. She may even grab her, hug her, and hold her tight, as though she is a small child (which she sometimes is, lezbehonest). She will attempt to deflect accusations of being a bully with such a menacing tone that you start to wonder “Is she a bully?” But then you, the viewer, will realize she isn’t really, she’s just a 50-year old woman who has finally realized she’s way too old and impatient to be on this stupid ass show and that she is surrounded by idiots, who, sadly, she can’t escape because she’s related to one-third of them. So, yes, she may be mean and snippy, even condescending, but not quite a bully. That will not, however, stop the sanctimony from ignoring the living shit out of you.

Then we, the viewers, will turn off the reunion, wondering how we wasted three hours of our lives on this garbage… only to forget about it all in a few months and tune in for season five.