SPOILER ALERT: Honestly, this should go without saying. The episode aired four days ago. If you have not watched it yet, but are clicking on links to anything discussing that episode, then you kinda asked to be spoiled, did you not? But in the interest of not having to moderate a ton of “OMG! I can’t believe you soiled it without warning us!” comments, here is your obligatory spoiler alert.

Monday night’s How I Met Your Mother—the greatest moment in HIMYM history or the greatest proposal on television of all time? Discuss amongst yourselves. I am not here for a recap. That has already been done beautifully in a plethora of other places [a side-effect of my originally-written post from Tuesday morning being deleted by my iPad app… But that’s another story for another day….]. I’m going right to the meat and potatoes: the proposal. 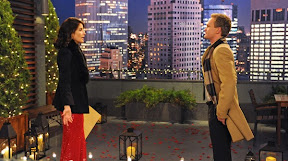 Look, we all knew it was going to happen. The season opened with Robin and Barney’s wedding day. We knew a proposal was going to happen and it was going to have to happen soon. I will admit, however, the Patrice thing threw me off. I had just assumed that the Patrice relationship would drag out and that Robin and Barney would somehow plan a quick trip down the aisle shortly after Barney cured whatever illness made him go after Patrice. Pop Culture Dad is more perceptive than me, however. As I mentioned Monday night on the Facebook page, he totally called the ending halfway into the show. Okay, okay, he didn’t predict the whole thing. Even he is not that good.

Seriously, Thomas and Bays deserve Emmys for the carefully-crafted season that led up to this amazing proposal [and, while we’re at it, let’s throw in some nominations for Smulders and my secret BF Harris, too, m’kay?]. Just look at all the pieces that went into “The Robin” and think about how this entire maddening season was worked to lead to this one moment. And while you’re at it, think about how the relationships of the characters have been built from Day One to make this even remotely plausible.

“The Robin” — The Last Play Barney Will Ever Need (Awwwww….)

• Step 1: Admit to yourself you still have feelings for this girl: “I am hopelessly, irretrievably in love with her. More than she knows.”
{sigh….}

• Step 2: Choose the completely wrong moment to make a drunken move after hanging out at a strip club. And get shot down on purpose.

• Step 3: Agree that you two don’t work, locking the door on any future you could have together, “I’m done trying to get you. I can’t do it anymore,” which will drive Robin nuts.

• Step 5: Find the person who annoys Robin most in the world and ask for her help. Explain everything to Patrice and hope she agrees to help.
{totally didn’t see that coming}

• Step 6: Check with your doctor about possible broken ribs. [insert visual of Patrice squeezing the life out of poor Barnacle]

• Step 7: Pretend to be dating Patrice.
{it all makes sense now}

• Step 8: Wait until Robin inevitably breaks into your place to find The Playbook and show it to Patrice, which you’ll monitor via the hidden cameras you have in your apartment.

• Step 9: After Patrice finds The Playbook, have your first big fight.
{This was pretty funny, watching Barney and Patrice on the balcony looking and gesturing like they were angry, but actually saying things like, “Thank you so much for helping me!}

• Step 10: Prove your loyalty to Patrice by burning The Playbook. And actually burn it. You don’t need it anymore.
{I started tearing up just a little bit here}

• Step 11: Because your friends have no boundaries, they’ll inevitably have an intervention for Robin, which you’ll monitor via the hidden cameras you have in Marshall and Lily’s apartment.
{The perfect representation of how well these friends all know each other}

• Step 12: Tell only Ted about your plan to propose to Patrice.

• Step 13: Wait and see if Ted tells Robin, and if he does, it means your best bro in the world has let go of Robin and has given you his blessing.
{And… Cue more tears. Think about this. Really think about it. It speaks volumes to the relationship between Ted and Barney. Without Ted’s blessing, none of this was moving forward. And Barney loves Ted so much that he was willing to leave the whole thing in his hands. This, to me, is almost better than the relationship between Barney and Robin, which I love}

• Step 14: Robin arrives at her favorite spot in the city and finds the secret final page of The Playbook, the last play you’ll ever run.
{and more tears…} 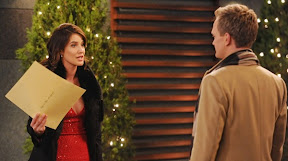 Now, of course, we reach the part where Robin is understandably peeved at the level to which Barney tricked her, until he implores her to flip the page over and read the last step…

• Step 16: Hope she says yes. [As Robin lowers the page, there is Barney with the ring on blended knee]

{Game OVER, folks! Even my hubby, a former fan who has made fun of this show for the last season, couldn’t hold it together any more. With tears in his eyes, Pop Culture Dad said to me, “Well… That was pretty moving.”}

Huffington Post has a video of the proposal (but not the voiceover of Barney reading the steps) here.

This episode got me thinking about my own proposal this morning. There was once a reality show following men around as they were about to propose, which proclaimed that while the wedding is the most important day of the bride’s life, the proposal is the most important day of the groom’s. That certainly has some truth to it (though I would argue that for couples who have children the births of their children are actually the most important days of both lives, but I digress…). I cannot imagine how stressful the proposal is for most men… you know, the ones who decide to do something monumental instead of just posting something on Twitter. And when the proposal hinges on everything just going right…. Sigh…

Poor Pop Culture Dad. While we both love my engagement story now, he was a total wreck at the time. We were already living together, and he had the engagement planned for a couple of months. He arranged to have lunch with my dad to ask for my hand, and that’s when the first part of his plan went wrong… My dad has a big mouth. My dad called me at work an asked why in the world my boyfriend would want to go to lunch with him, were we trying to get married or something? Really, Daddy?? I remember muttering something to him like, “I don’t think you were supposed to tell me about that.” One of my friends and I tried to come up with other reasons my then-boyfriend may have arranged this secret meeting with my dad. My 30th birthday was coming up. Maybe this was related to my party. Maybe they were planning something bigger than the Hello Kitty and karaoke I had requested? I chose to go with that theory rather than get my hopes up.

Then the day Pop Culture Dad and my dad were supposed to meet, my aunt died. Not just any aunt, either (my mom had 15 siblings and my dad had four, obviously I can’t be close to every single one). My godmother. My mom’s best friend. The aunt who had lived with my mom and I, raising their two kids together as more like brother and sister than cousins, for much of my life. My mom was, understandably, a wreck. There was no way my dad was going to be anywhere other than beside her side [they’ve been divorced for three decades, but are still best friends]. Same with me. So those plans were off. And we had to leave for Louisiana the next day… The day my husband had planned to propose. And he had already had a plate made up to do the proposal.

So what did my dear husband do? Improvise, of course. Even though I was up until 3 a.m. Making funeral arrangements, consoling my mom, and packing for us to drive from Texas to Louisiana, he woke me up at 6 a.m. that morning. Groggy as I was, I still remember that conversation:

PCD: Wake up, honey! I brought you some coffee.
Me: I don’t want any f—ing coffee. I want to sleep.
PCD: We have to go. And you need coffee.
Me: No. I need sleep.
PCD: Trust me. You really want this coffee.
Me: {finally suspecting something was going on an sitting up} Wha—?

And there was my proposal on a plate…. on a flower-filled tray… with the coffee I was too tired to want. 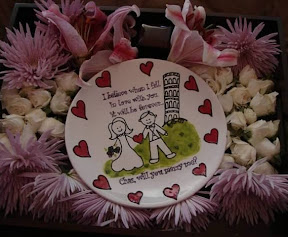 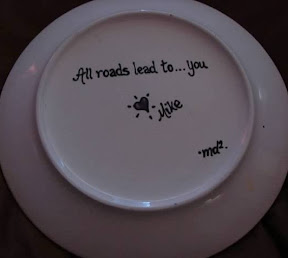 Obviously, nothing went as Pop Culture Dad scripted or planned. While the “god mother dying the day before the proposal” story might make an interesting twist for scripted television, it certainly isn’t one you want in reality. I am told the originally planned proposal involved me coming home to a house filled with flowers. That would have been nice. But my actual proposal was nice too; because at the end of the day, what I had was the man I was madly in love with completely consumed with making sure that I knew exactly how much he was in love with me too. And isn’t that all that matters?