As you may have already heard, CNN newsman Don Lemon caused quite an uproar in the black community this week when he went on the air to say that he not only agreed with Bill O’Reilly’s racist, repugnant views on what’s wrong, he thinks Papa Bear O’Reilly didn’t go far enough. Saywhatnow?

There are so many things wrong with Lemon’s position. Sooo many things. First, let me make it clear from the outset that I’m not saying that any criticism of the black community is 100% unwarranted or unfounded. What I AM saying is that this criticism is wrong. Lemon’s basic problem boils down to the fact that he doesn’t seem to fully grasp the issues of cause and effect.
So what did Don Lemon actually say?:

[playing clip]
BILL O’REILLY, FOX NEWS HOST: The reason there is so much violence and chaos in the black precincts is the disintegration of the African- American family.

LEMON: He’s got a point. In fact, he’s got more than a point. Bill?
(BEGIN VIDEO CLIP)

O’REILLY: Raised without much structure, young black men often reject education and gravitate towards the street culture, drugs, hustling, gangs. Nobody forces them to do that, again, it is a personal decision.
(END VIDEO CLIP)

LEMON: He is right about that, too. But in my estimation, he doesn’t go far enough. Because black people, if you really want to fix the problem, here’s just five things that you should think about doing. Here’s number five, and if this doesn’t apply to you, if you’re not doing this, then it doesn’t apply to you, I’m not talking to you.

Here’s number five. Pull up your pants. Some people, a lot of them black, gave me flak for saying that recently on “The Wendy Williams Show.”

If you’re sagging, I mean — I think it’s your self-esteem that is sagging and who you are as a person it’s sagging. Young people need to be taught respect and there are rules.

LEMON: Sagging pants, whether Justin Bieber or No-name Derek around the way, walking around with your ass and your underwear showing is not OK. In fact, it comes from prison when they take away belts from the prisoners so that they can’t make a weapon. And then it evolved into which role a prisoner would have during male-on-male prison sex. The one with the really low pants is the submissive one. You get my point?

JAY-Z, RAPPER: For our generation what we did was we took the word and we took the power out of that word.

CHRIS ROCK, COMEDIAN/ACTOR: We took this word, and we made it into poetry.

LEMON: I understand poetic license, but consider this: I hosted a special on the n-word, suggesting that black people stop using it and that entertainers stop deluding yourselves or themselves and others that you’re somehow taking the word back.

By promoting the use of that word when it’s not germane to the conversation, have you ever considered that you may be just perpetuating the stereotype the master intended acting like a nigger?

A lot of African-Americans took offense to that, too. I wonder if I gave the right advice, I really did. But confirmation came the very next day on my way home when I exited the subway in 125th Street in Harlem. This little kid in a school uniform no older than seven years old, he was crying his eyes out as he walked down the sidewalk with his mother.

I’m going to be honest here, she turned to me, and she said “I’m sick of you. You act like an old ass man, stop all that crying, nigger.” Is that taking the word back? Think about that.

Now number three. Respect where you live. Start small by not dropping trash, littering in your own communities. I’ve lived in several predominantly white neighborhoods in my life, I rarely, if ever, witnessed people littering. I live in Harlem now, it’s an historically black neighborhood, every single day I see adults and children dropping their trash on the ground when a garbage can is just feet away. Just being honest here.

And number one, and probably the most important, just because you can have a baby, it doesn’t mean you should. Especially without planning for one or getting married first. More than 72 percent of children in the African-American community are born out of wedlock. That means absent fathers. And the studies show that lack of a male role model is an express train right to prison and the cycle continues. So, please, black folks, as I said if this doesn’t apply to you, I’m not talking to you. Pay attention to and think about what has been presented in recent history as acceptable behavior. Pay close attention to the hip-hop and rap culture that many of you embrace. A culture that glorifies everything I just mentioned, thug and reprehensible behavior, a culture that is making a lot of people rich, just not you. And it’s not going to. That said, though, the political right is not off the hook.

I don’t want to give Bill O’Reilly a license to say anything, because he’s never been a young black man growing up in the situations that a lot of them grow up in.

Unfortunately, there are a lot of whites (Bill O’Reilly especially) who refuse to have an honest look at their own behaviors, fears, and prejudices and deal with them in a meaningful way that does not involve blaming the victims. And there are far too many blacks like Don Lemon and Charles Barkley who are all too happy to give them that pass.
Here’s the problem, though: We can’t make any systematic changes without the majority/ruling class. Women’s rights didn’t happen simply because women wanted it. It happened because there were men who supported us. Slavery wasn’t abolished simply because blacks wanted to be free; it happened because there were whites who were also willing to fight for our right to freedom. We are in a new Civil Rights Era. People like Bill O’Reilly and Don Lemon can continue to be on the wrong side of history, or they can get off their asses and take a look at the REAL causes of discrimination and what needs to be done to fix it.
Black people can clean our own house, sure. But first, we need white people to clean theirs. We can’t be in this together, if the blame for centuries of prejudice falls on us alone. 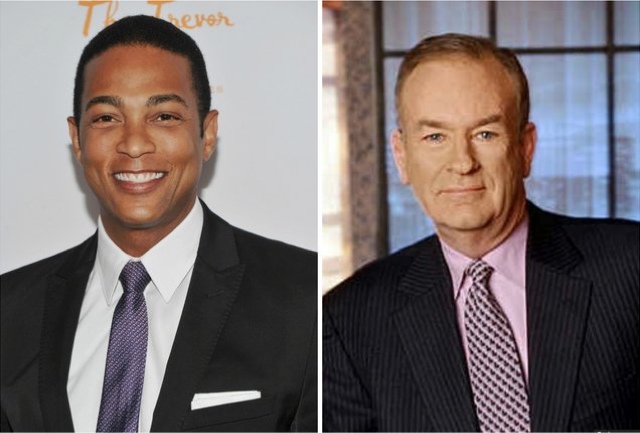