This week, I was listening to Lance Bass’ “Dirty Pop” on my way home [Sirius/XM OutQ 109]. I don’t remember the celebrity or the topic that started the train of thought, but Lance and his co-hosts opined that society has become less forgiving of celebrities when they screw up, and they believed the rise of social media has a lot to do with that. I completely disagree.

According to the Dirty Pop Crew, thanks to celebrity and media over-saturation, now when we see a Lindsay Lohan or Paula Deen type, once they’ve messed up, we as a society get tired of hearing from them and want nothing to do with them. While I know I personally feel that way (and social media has little to do with it), that doesn’t seem to be the trend of celebrities in general.
Take Chris Brown for example. What the heck does this douchebag have to do in order for people to ask for him to disappear?? He nearly beat his girlfriend within an inch of her life [and, if you read the police report, it sounds like exactly what he was trying to do was kill her]. He barely showed any remorse for it, only instead giving interviews saying he was sorry if he disappointed his fans [that “I’m sorry if you think I should feel sorry for something” fake apology is the worst ever, and no rational person should ever fall for that!!] but then going on to have harsh words for his “haters,” because he was a “child of God,” so the rest of us could suck it. From that he has had several instances where he goes on Twitter tirades until his publicist or someone makes him delete his hateful tweets. And then, if all of that wasn’t bad enough on its own, the guy has an interview with Robin Roberts—fresh out of chemo—where afterwards he was so mad at her (and called her a few choice words) that he punched a mirror and threw a heavy chair out of a window and onto the street below. He never even tried to do a real or “I’m sorry you think I should feel sorry” apology for that either. But did people cut off Chris Brown? Did they ostracize him from the community of celebrities? Was his brand tarnished in the least? Nope. Not by his fans. Heck, shortly after he beat the crap out of Rihanna, some newlyweds became internet sensations for a YouTube video of their entire wedding party dancing down the aisle to “Forever.” That song is still used as an anthem for damn-near everything fun and celebratory. Chris Brown’s misguided fans continue to support him and all of his temper tantrums, and buy the line of horseshit he constantly tries to sell, painting himself as a victim. In fact, his popularity is at such an all-time high that it is apparently up to Chris Brown and Chris Brown alone to decide when it is time for him to quit… maybe. Chris Brown announced on Twitter this week that after his next album comes out this fall he is quitting music, because he’s tired of being famous for a “mistake” he made as a teenager rather than his music. Gee… that’s funny… Because from where I’m sitting, the only people who still focus on his “mistake” [seriously, I’m just angry he has the nerve to be dismissive like that] are those of us who didn’t give two craps about his music in the first place. Sure, before he revealed himself to be a jerkwad of ginormous proportions, I liked his music just fine. But there is NO performer good enough to make me overlook these kind of issues. I do have some morals, you know. In my household, the TV or radio is changed when he comes on. Sometimes I feel like I’m alone in my continued punishment of not-so-sorry sorry celebrities. But then something wonderful happens, like when Zynga stupidly tried to feature the phrase “Chris Brown” in its Daily Draw. The result was a lot of pictures of Rihanna’s bruised and battered face accompanied with statements that people needed to remember what this stain on humanity has really done with his life and realize why he should not be honored. My drawing skills skew more cartoon-oriented than life-like portrait-oriented, so my protest went thus: 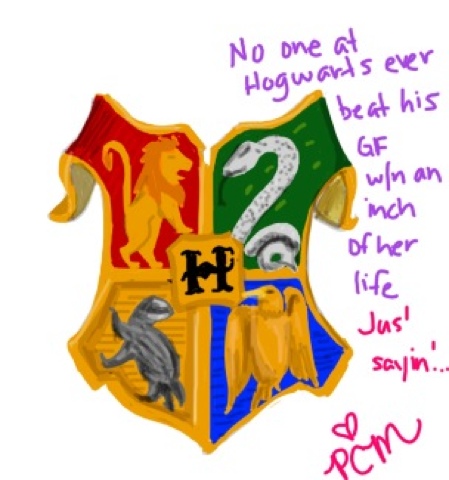 Chris Brown isn’t the only celebrity who has gotten a pass on bad behavior. Sure, we’re sick of Lindsay Lohan now, but how many years of bad behavior did it take before we got there? Ten? I can’t even keep track anymore. And, really, it’s disingenuous to say that “we’re” sick of her. Obviously, someone still likes hearing about Lindsay Lohan, or I wouldn’t even know that she left rehab last week.
Paula Deen’s restaurant had a line out the door and around the block the week after details of her racism [no, not just 38 years ago, dolts!] emerged and after her four attempts at her bogus “I’m sorry if you felt offended” “apology.” Of course, the people waiting for hours and hours to go into her restaurant were probably also just racists and bigots who don’t think they’re racist and bigots [much like the people who lined up to line the corporate pockets of Chick-Fil-A in honor of its Hate Crime, er, CFA Appreciation Day don’t think they’re bigots… but they are]. But the fact is, while Paula Deen lost several endorsements and fans that month, she also gained just as many. In fact, despite being universally cut off from all of her former sponsors, many of them have announced recently that they’re going to take her back. No, she hasn’t done anything new or special to indicate she truly knows what a horrible person she was (is) and wants to change it. In fact, new allegations have since come out about how she asked black women working for her to dress like Aunt Jemima. The fact is, Twitter and Facebook have moved on, so now all of the corporate sponsors who threw up mock outrage (which, I’ll admit, looked real at the time) in June, now feel perfectly safe fully supporting someone they allegedly found so distasteful not even two months ago.Yes, Black Twitter made a mockery of her with the awesomely funny #PaulasBestDishes hashtag… but no one else seemed to care because she “had been punished enough” or “it’s old already.”
Anthony Weiner… Do you remember the days when disgraced politicians would disappear and never come back? Or at least they’d disappear for a long enough time and re-emerge as so awesome of a character that you almost totally forgot what it was that they had done? Apparently, those days are gone. Twitter (or, rather, his inability to use good judgment on Twitter) did take him down. But… he popped back up… Same horndog, a-hole he was before. No changes, and this time no apologies. Heck, he’s even doubled-down on his jerkiness.
All of this is to say, while I agree with the Dirty Pop Crew that social media makes it easier to become aware of celebrities’ dirty deeds and makes it easier to judge them for it, social media has not in any way created this “gone and dead forever” scenario that the DPC claims exists. Celebrities these days bounce back like one of those inflatable punching bags—you keep pushing, but even the worst of them refuse to stay down. And these days, they don’t even bother with real and sincere apologies.