Macklemore and his fake social activism is more tiresome than the people defending him as “the best hip-hop anything, ever… even though we’ve never actually listened to hip-hop.” But the more his old tweets surface, the more sketchy and inconsistent his claims of dependency and recovery become, the more he tries to claim this loving relationship with Kendrick Lamar, and the less Mary Lambert gets acknowledged for her major contribution to his success, the harder it gets for me to stick with my original thoughts of “I LOVE this guy! I just think there are certainly better hip-hop artists who are actually hip-hop, rather than hip-pop.”

I mean, these 2009 tweets of his are real and verified [not that anyone was trying to pretend to be Macklemore in 2009 anyway]: 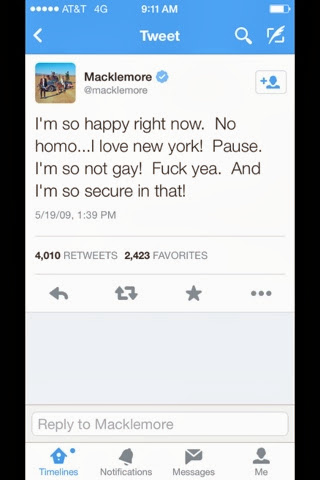 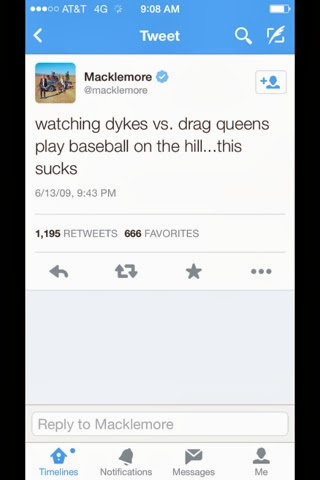 Not exactly the beacon of LGBT rights, is he? And don’t give me that, “this was five years ago; maybe he changed” crap. If you read his interviews, he allegedly came to his enlightened positions on LGBT rights when he was young. You know… That uncle he’s always invoking?

His tales of dependency and recovery make no sense. He always claims alcohol dependency but the drugs he claims change every time he gives an interview. It started with OxyContin dependency, and now his claim is weed and sizzurup (Google it). But he’s also never been to an NA meeting and claims he’s too busy to do AA consistently. I get that not all sober people do AA or NA, but if you know any recovered addicts, you know they aren’t dealing with his (alleged) drug issues at AA meetings. Also, he’s going to AA when it’s convenient for him to bring along a Rolling Stones reporter; but he’s clearly busier than Ben Affleck (who regularly attends meetings), even though no one knew who the heck Macklemore was back in 2008, which is the time he “more or less” got sober. Which is another thing. Tell me one recovered addict (other than Macklemore) who can’t tell you the day s/he had his/her last drink/hit, let alone year. Seriously, he doesn’t know the year?? I mean, maybe he was soberish and slipped or has never fully and truly done a recovery program but is still sober. That’s still great. But why do you feel the need to bring an interviewer along when you actually decide to go to a meeting??? This self-promotion crap is so old… so very tired.
People are starting to catch on to this guy. These old tweets have found new life today. Even the women at Jezebel (who love him so very much) are starting to talk about it (http://groupthink.jezebel.com/presented-without-comment-1509651073).
Look Macklemore defenders, it isn’t that we can’t accept a white rapper. We accept Eminem just fine. Snow too. Bestie Boys, hell yes! It isn’t that we can’t accept rappers who don’t sing about bling-bling, bitches,and hoes either. The list of rappers who defy that stereotype is actually really long. Anyone who actually listens to hip-hop could rattle off 10 socially conscious hip-hop artists in 10 seconds. People who think rap is only about “bitches and hoes” and guns and bling clearly know nothing about rap—not its roots and not its present. The problem with Macklemore isn’t his whiteness and it isn’t his (alleged) consciousness; it’s his personal narrative and his placement.
The man can flow. He would’ve been famous even if he acknowledged his past dickishness and didn’t try to fabricate this haggard backstory. But now, here’s where the famous backlash begins. If Macklemore befalls the same fate as Vanilla Ice, it won’t be the “white rapper” curse; it’ll be the “big liar” curse. Lying didn’t work for Milli Vanilli, and it shouldn’t work for him either.
Also, I’m sorry, but Macklemore isn’t everything in rap. He can’t even get played on most hip-hop channels, but he owns every pop station. And, again, don’t give me that “it’s because he’s white” shit, because Eminem has an entire channel on Sirius/XM (Shade 45)
It’s a damn shame Macklemore turned out to be such a putz, because I really like some of his music.