Rumors are starting to swirl that with the increased likelihood of Teresa Giudice and hubby Joe being jail-bound that Bravo is going to cancel The Real Housewives of New Jersey. As someone who has watched this show (and often blogged about it) since the very first episode, I’m perfectly okay with that.

For anyone who has been under a rock (or, like many of my dead to mefriends who don’t watch the show), here’s the two-cent summary: Teresa and Joe have been indicted in federal court on Monday on 39–count ’em, 39— counts of fraud. So what did these losers reality stars allegedly do? Exaggerating income while applying for loans before landing their RHONJ gig, committing bankruptcy fraud by deflating their incomes and failing to disclose assets after the show had aired, failing to file five years of tax returns, and lying on some of the tax returns that they actually did file.
Now, to anyone who’s watched the show before, none of this should be a surprise. At the begining of the second season, we all witnessed Teresa paying for more than $100,000 worth of furniture in cash. WHO has that much cash lying around, and who uses it to pay for general goods and services? (Generally) people with shit to hide, that’s who. Also, as a (then-)bankruptcy attorney, I was pretty insulted that the Giuidices would be stupid enough to fail to disclose major assets on their bankruptcy petition… that anyone with cable television could easily see. I mean, it wasn’t really a big surprise when the Chapter 7 trustee was able to pinpoint a number of assets (including, hello, her salary from the Bravo TV show!!!). The Giudices avoided prosecution (they thought) by dismissing the bankruptcy case. Well, y’all, you thought wrong.
Here are the Giudices entering the federal courthouse on Tuesday: 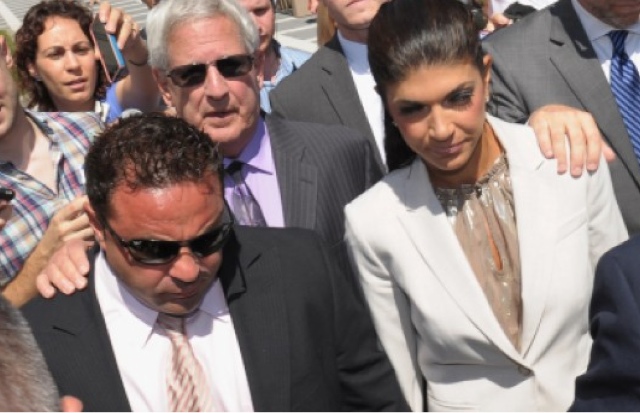 They mad, y’all.
Apparently, on the way in, Joe pushed a couple of cameramen and yelled at them (against the audible advice of his attorney). And after the hearing, his mother cussed out a few reporters, while his dad flipped the papparazi the bird. These people are seriously klassy, y’all.
The industry rumor is that Bravo wants nothing to do with it. Actually, the unofficial official statement is that Bravo only wants to show happy situations, like marriages, births, friendships, etc. But anyone who’s ever watched (or, heck, even heard of) reality TV knows this is not REMOTELY true. If I had to guess (and, apparently, I do), Bravo just doesn’t want to deal with the mounting liability that is the Giudice family. This isn’t the first time the Giudices have had legal trouble and faced possible jail time—Joe has had legal troubles aplenty; however, this is the first of their legal troubles where Teresa also faces jail time. Also, this is certainly the most serious of their offenses. Not only could they be facing up to 50 years imprisonment each, but Joe (who I did not know until this week isn’t an American citizen) could face deportation back to Italy. This goes way beyond DUIs and bar fights. They messed with the Feds!
So following the whole “Bravo is done with the Giudices” insider scoop, the speculation then follows that Bravo may cancel RHONJ altogether. When you think about it, this completely makes sense. There is nothing remotely interesting (and I use “interesting” relatively here) going on that doesn’t involve Teresa. No one cares about Melissa’s singing (ha ha) career except for the fact that it causes so much angst in Teresa. Jacqueline is sort of (but not really) interesting in that she’s apparently losing her mind… But why is she losing her mind? Because of Teresa. Caroline is (sort of) (sometimes) interesting to watch mother henning; but these days, with her kids out of the house, the person she seems to mother hen the most is Teresa. This show is so boringTeresa-centric that it would be absolutely impossible to have a show with Teresa gone unless they scrapped the entire current cast and started somewhere fresh. And it stands to reason that if they started with a new cast, they would have to get out of Franklin Lakes, because everybody there seems to be in everyone else’s business. What would be the point of having a new cast if the same people kept popping up every episode. And, I don’t know about you, but I have no interest in watching the limited amount of Kim G they show now, let alone a whole Kim G-centered show.
Lezbehonest for a moment, though, shall we? RHONJ is really two seasons past “should have been cancelled.” While the whole “let’s have a Housewives where virtually every castmate is related or damn-near related to the others” was cute for a couple of seasons, it got really old really fast. I don’t like dealing with my own family drama. There is nothing cute and compelling about watching the same 30 years of baggage play itself out for two years. Bravo should have scrapped this cess pool a long time ago and just moved the hell on.
There are plenty of Housewives franchises left to fill the void. Heck, I would even welcome Bravo picking up another city, so long as they didn’t repeat that disaster that was DC. In fact, Andy Cohen, if you’re listening, might I suggest (oft-rumored locale) Dallas? If you don’t know what kind of crazy Housewives potential you might find there, I would ask you to watch repeats of your own show Most Eligible Dallas, and then I would ask you to cross networks and see that delicious trainwreck of Big Rich. There is so much botox, big hair, big money, and big crazy to be found in the northern region of my messed upfair state. Just do it already, Bravo. Do. It.