Pop Culture Dad and I have been really disturbed by Dexter to last two seasons. Is it the borderline incestuous relationship between Dexter and his adopted sister, Deb? Nope. The gruesome and graphic killing shown on screen? Nope. The bar fighting? Nuh-uh. Drug use? No. The sex? Shyeah, right… Ha ha.

It’s Dexter’s horrible parenting skills.
I get that Dexter never wanted to be a father and never even really intended to have human relationships that involve an emotional commitment. I mean, the guy is a serial killer. What else would we suspect? But he has the kid, and he very clearly loves Harrison. So why, oh why, is he never freaking at home? And why, on those occasions where he is at home, is he slipping in his daddy duties?
Yes, I’ve seen the various tender moments of Dexter making breakfast for Harrison or taking him to playdates. But there are many more moments where the nanny has been frantically trying to call Dexter to find out where he is, because he was supposed to be home hours ago; times where Dexter has barged in on the nanny’s personal time, demanding she take Harrison right away [I don’t know about you all, but I’m pretty sure my babysitter would have quit the second time that happened–if not the first]; or just seems to be operating as though he doesn’t have a kid at all—always leaving either Pop Culture Dad or me asking the other, “Where the hell is Harrison??”
Look, I get that he’s busy tracking down or killing serial killers, but plenty of parents have two jobs, Dexter, and they all arrange to have childcare in place before leaving for work, rather than having it be an after-thought.
The straw that broke Pop Culture Dad’s back, however, came in the first episode of the season (“A Beautiful Day”). Dexter figured out that Deb was in over her head, and he needed to drive out of town in the middle of the night to go rescue her. Dexter, of course, tried his usual approach of driving to his nanny’s house [she was mid-coitus, by the way] in the middle of the night and insisting (okay, demanding) that she take his son so he could jet off to some undisclosed emergency. Homegirl finally grew a backbone and told him no. So with no backup childcare options, what does Dexter do? Take his four-year old with him to save Aunt Deb from a paid assassin. Of course. And that wasn’t the worst of it.
Once Dexter and Harrison arrived in Tallahassee (or wherever the hell), Dexter exits the car and tells Harrison to stay put. He doesn’t tell Harrison to go to sleep or ask him keep his head down or instruct him at how incredibly unsafe it would be for him if he got out the car. Heck, he doesn’t even lock the door. So you can guess what happens next….
Dexter returns from his struggle with the assassin who tried to kill his sister, only to find that his preschooler was nowhere to be found. It was at that point that Pop Culture Dad turned to me and said, “If this is how it’s going to be all season, I don’t think I can watch this anymore! Seriously, even for a serial killer, he is the worst dad in the world!!” Oh, and did I mention that when Dexter did find Harrison, he picked his son up only to realize that he had just picked his kid up with bloody hands? 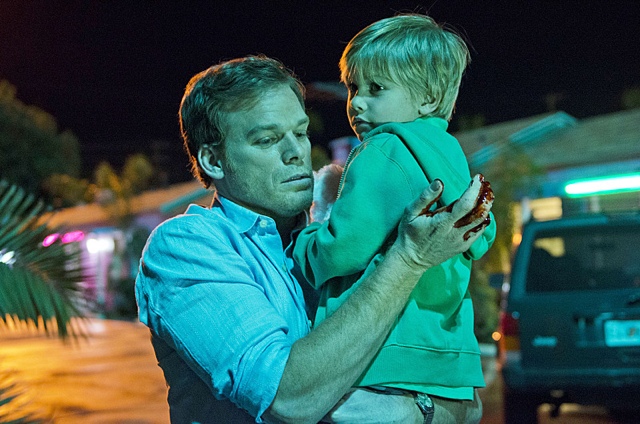 And there you have it folks. If Charlie Manson or Ted Bundy had had kids, Pop Culture Dad and I are pretty much betting they would have been better fathers than Dexter Morgan. Based on this article about the Happy Face Killer’s daughter and how she wished she could stop loving him, I think our theory is right.