Last night, Ted Cruz, the junior senator from my state (and general stain on humanity), decided to filibuster into the wee hours of the night on his crusade against ensuring proper healthcare coverage for million Americans. During his all-night-long rage against quality of life, he read Green Eggs and Ham. Why that book instead of any other Dr. Seuss tale? Well, ignoring the irony of reading a book about someone who stubbornly insists he hates something he’s never tried only to find out in the end he likes it to protest something Sen. Cruz has declared he hates, even though it is yet untested, I have some theories about why the other Seuss books were a no-go: 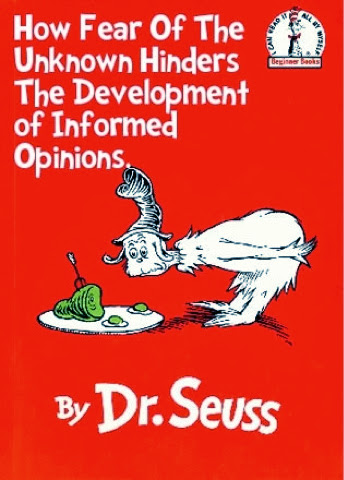 1. Mr. Brown Can Moo, but that mooing was the result of a pre-existing medical condition. Formerly, Mr. Brown could not qualify for insurance based on that condition; but now, thanks to the Patient Protection and Affordable Care Act (ACA), he can no longer be turned down by insurance companies because of any pre-existing conditions, even mooing.
2. The Cat and the Hat‘s friends, Dick and Sally, are now college students in their 20s. Their mothers did not mind at all if the did opt to stay on their families’ plans as dependent children. Thanks to the ACA, Dick and Sally can stay on that plan as long as they are dependents, up to age 26.
3. Oh The Places You’ll Go, like to the doctor when you’re mildly sick, instead of the minor emergency room; because now that you have insurance, you’ll have real co-pays instead of attempting to duck hospital bills that come later.
4. Horton Hears a Who, but now that the ACA requires strengthened standards for community mental health centers, there’s a good chance he can find a qualified doctor to help him work through the schizophrenic episodes.
5. You’re Only Old Once!, and under the ACA, there will now be a temporary reinsurance program for employers (reimbursing them for 80% of claims between $15,000 and $90,000) providing health insurance coverage to retirees over the age of 55 who are not yet eligible for Medicare.
6. If I Ran the Circus, it would have to provide me healthcare insurance or pay a nominal penalty so long as I remained full-time and it had 50 or more employees.
7. I Can Lick 30 Tigers Today!, but I’m pretty sure I would need immediate medical attention afterward. Now I can afford it!
8. I am not Going to Get up Today! Well, I wasn’t. But then my employer, a small business, received a grant under the ACA for establishing a wellness program, and now I realize the benefits of getting up and moving.
9. The Butter Battle (Book) was resolved when I read the nutritional content on my menu at Cracker Barrel. The ACA requires chain restaurants and food sold from vending machines to disclose the nutritional content of each item. Whelp! I dodged a bullet there!
10. The Lorax developed a powerful cancer-fighting drug from those glorious trees, and he received a 12-year patent on exclusive use before the FDA will be able to make a generic version of the biologic drug (which hopefully will not further deplete the tree resources!).